Oops - how did a year go by so quickly?

No the decorating didn't take a year. It did take longer than expected. I discovered the hard way that painting over blue with magnolia requires a LOT of coats unless you undercoat... Anyway, it is all finished and the room can be worked in again.

Enthusiasm waned because that $£#% chassis wouldn't work reliably. Whenever I thought it was quartered,a wheel would slip. Needless to say it ended up in a box in disgust. 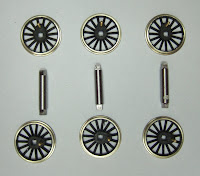 Last year I did build some baseboards aimed at a new layout and then a eureka moment happened. A very clever man in the 3mm Society developed a method to punch the Society finescale wheels with a square hole so that quartering problems go away. It took me all of 5 minutes to find my wheels, pack them up, and send them off.

As soon as they were back, they were onto the engine and it still ran poorly. Very depressing and back in the box in more disgust.

New year, new resolution and I'm going to fix it. The bench was cleared tonight and the engine dismantled, various alignments checked, decisions made where washers should go to space the wheels, pick-ups adjusted and.... it just staggered along.

I've been doing all this work on the Bachrus Saddles as I don't have a layout but I popped the engine directly onto the track and it just ran straight off the end.

Out with the vernier and a closer examination of the saddles showed there's a difference between the top and bottom measurements. I had assumed the dimensions would be the same so when it was tight on the track it would be spot on for the wheels. No, the gap is wider at the top so when I set them tight on the track they were so wide there was very little contact with the loco wheels. Set them in by 0.5mm and it just works...

Maybe now we will see some proper progress.
at January 29, 2012 No comments:

And Then There Were Two

Not yet at the full complement but with some perseverence the second coach is now in the same state as the first. The confidence of having w...