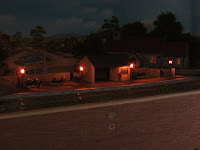 After a successful outing to the Beds and Bucks 009 Open Day it was time to finish off the lights. I had worked out the best combination of lights and resistor, in this case 2 lights with one 220 ohm resistor should give good life expectancy on the bulbs without too much heat loss dissipation from the resistor. You can manage without a resistor but it does help limit the current should something go wrong one day in the future.

Underneath the layout all wires go to terminal pads. These are simply made from copper clad board that has been sawn into strips and then had grooves added. The pads are flooded with solder whilst on the bench and as many as needed are glued to the underside of the board. To glue the pads I used glue sticks from electric glue guns but melted with the soldering iron - it was out ready.

The wires were all soldered on and then came the moment of truth - power was applied. All worked well for about 5 seconds before pairs of bulbs started flickering. What had I done! Power off quickly. This is where the resistor should have helped to limit the current. After much head scratching I realised that I had used liquid flux when soldering the wires and resistors to the pads. Not all the flux had evaporated so I ended up with liquid lying over the pads and starting to conduct in interesting ways. Dried it all off and it works fine.

In a moment of serendipity Phil Parker has an article this month in Hornby Magazine about soldering. It's a good read and after a brief email exchange I discovered that he would not typically use separate flux in electrical wiring. My belt and braces approach brought it all on myself!
at January 24, 2010 No comments:

For a long time I have been keeping up with Carl Arendt's web site devoted to micro layouts. It contains some truly miniature layouts. Having shown some of these to my wife she expressed the desire to see me put a model railway on a Christmas cake.

I put it off for a while but eventually I thought how to do it. My first thought was to go for T gauge. It is so small it was bound to work. Unfortunately, after investing in a set, I realised that there was only settrack available and even the smallest curve meant that the cake would have to be pretty big.

After much cursing I decided to go up a scale and bought a Z gauge loco and a length of flexi track. The method of doing the basics is nothing new:
I decided to power it with PP3 battery. Actually I wanted something smaller but this was the best compromise at short notice. The volts needed reducing so I put several resistors in series until the volts were about right. I glued the resistors to the cake board and used them as a frame to hold the battery.

Then it is a case of ballasting the track and adding scenic scatter. This is actually important because despite wanting to cover it with fake snow, the ground will always show through somewhere and it needs to be green rather than cake board silver.

Lastly add fake snow. Short of time I tried a variety of methods, none really good. Before next year I intend to buy some Woodland Scenics snow and do it properly.

Lastly I knocked together a church to go over the battery. It's a little crude but I rather left it to the last minute...
at January 12, 2010 No comments: 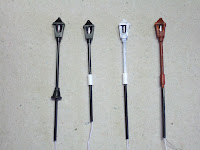 When I set out to build Mospick Halt I wanted to have working lights in the buildings. I managed to light the engine shed and the church but I ran out of enthusiasm when I got to the pub...

However, I was sure I would have lights on the platforms but they all seemed very expensive for what they were until I came across Kytes Lights at the Swindon show in 2009. I can't remember the exact price but they seemed good value for money and they had a flexible stem and base so you could make them as tall as you wanted.

I decided to install them and realised that really that base was just too huge. The picture shows the original one on the left. It widens to 6mm at the bottom - 18 inches in real life. To replace it I found some plastic tube that needed drilling out. I put a chamfer on the top and slid it onto the original tube - much better to my eye.

After that it's a couple of coats of whatever colour you fancy, in my case 'Rich Transparent Red Oxide'. The picture shows the before during and after stages of the transformation. Just don't look closely at the paint job, the photo will magnify to far greater than real size and looks rubbish. 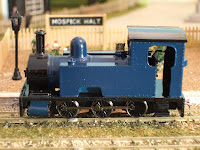 The other work done was to paint an engine to match the coaches previously done. I'd built the loco, "Dennis" from GEM. Actually I wimped out and didn't bother with the valve gear or some of the detailing but this was my first loco kit for decades so I cut myself some slack.

I kept putting off the painting till really it was too cold. I'm sure I read somewhere that you should not spray paint in the cold and now it's Christmas. I decided I had nothing to lose so I cleaned the body with a glass fibre brush and then scrubbed it with Shiny Sinks. It was left in the airing cupboard overnight to dry and then the moment of truth - what happens when you spray in the cold?

The answer is that you spray paint and it just works. Call me cavalier but I don't have a spray mask or a spray booth so I just go and stand in the middle of the garden and do it, firstly with Humbrol Acrylic primer and then, after a suitable period, with Humbrol midnight blue.

The results speak for themselves. The black and the red were brush painted Humbrol enamels. I'm really pleased with it as normally painting is the one job where I rearely like my handiwork but this suppassed itself.

I put it on the track and hooked up the coaches and .... it dragged the coaches off the track on one bend every time. See the previous post where I went through the back to backs. It took me a while to resolve this one but I had bent the upright tang on the coupling to too steep an angle and the Bemo coach coupling was snagging and dragging the light coackes off the track. A quick straighten with pliers and I now have a presentable loco and coaches. 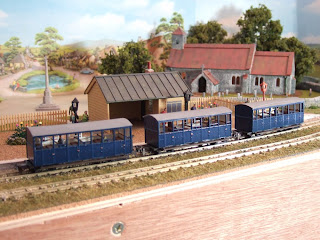 Okay, so not a lot of progress since September - lots of the usual reasons. However, I have a show next Sunday - Mospick Halt is at the Beds and Bucks open day for the 009 Society (details on the society website here).

Over Christmas I managed to do some modelling and as the Kidlington Scoutrail exhibition has been cancelled I have made quite a bit of progress and the coaches are finished. As I said in my previous post, I built them pretty much as instructed. I came across two issues, one expected and one not:

The coaches are very light. They were jumping off in several places on my track. In the end I added as much lead as I could under the underframe. It had a very good effect but still they derailed at a particular point and at a particular curve.

The other problem was the back to back measurements. I've got a back to back gauge and I used it to check the wheels and found two coaches were fine but the one was badly out and this was the one that kept coming off. A quick set of the back to back and hey presto - it still came off over certain points!

Much head scratching and running of the coach over the point convinced me that the coach was riding up on the flange rail. Got the vernier out and there is was. Despite the back to back gauge fitting the wheel set perfectly it still wasn't enough for this point. Made the wheelset wider and I have 3 new coaches that run over all the points!

The only problem is when I pull them with the new loco they still derail on a bend - more on that in another post.
at January 10, 2010 No comments: