The long term aim of the layout is that it will run by itself with a simple computer system knowing which of the fiddle yard lanes are occupied and running round one engine after another. Ideally it would know what direction each train is facing and propel it in the correct direction.

However, the layout needs to be able to operate manually should automation fail. Note that I am writing this as British Airways is into day 3 of it's disastrous computer issues which grounded all their flights from Heathrow and Gatwick. I'm not in their league but I know it can go wrong.

Here is the fiddle yard from above:

The only difference to the usual method of wiring is that insulating fishplates have been used at both ends of each road. I know I don't need the extra isolation right now but I figured it would be easier to fit them now than dismantle it in the future should the extra isolation be needed.

Below are the components that will be used to control the layout: 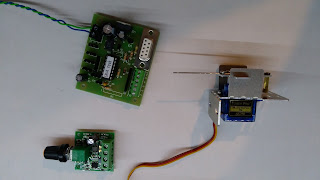 Bottom left is one of those cheap PWM controllers available off Ebay for under £4. It only needs the addition of a DPDT switch to change direction and that is traction sorted.

Automation is much easier with servos rather than the traditional solenoid point motors so I have chosen the ubiquitous SG90 fitted to David Ingoldby brackets as shown top right. David is a MERG member and makes these folding metal brackets that can be fitted with end of travel switches and are very robust.

Top left is the Servo4 board, also available from MERG. It took me less than an hour to put this one together this afternoon. The Servo4 board drives 4 servos (so I will need 2 boards) and will remember the endpoints of travel which can be set by a control box or by a laptop. I chose the laptop option as I had the necessary USB to serial lead from a previous foray into DCC.

What is not showing is the power supply. All this runs off a standard 12V power supply that you can get from around £7 from Amazon. The intention is to have one supply drive the LED strips and one to drive this circuitry. The servos can be run from an independent supply but I'll take that route should I get the dreaded twitching or interference that can affect layouts with servos.

So those are the pieces that will be fitted over the next week or two in-between the day job. I know how I will adjust it for computer control but for now I'll put this lot in place to get something running.
at May 29, 2017 No comments: