One task that had been left for later is wiring the points in the fiddle yard. For it's first outing the points were operated manually and there was no frog wiring. This wasn't an issue and it was fine to operate like this. Long term I have half an idea to automate the fiddle yard which means it does need wiring fully.

At a recent 009 Wilts group meeting, Adrian turned up with a new point motor, the MP1 from MTB Models. They are available from  DCC Train Automation. They are a motorised switch with adjustable range, automatic cut-off and a single pole switch. They are also very compact with a 45mm x 45mm footprint and less than 20mm deep. They run off AC or DC.

An order was placed and they were waiting for me on my return from a business trip and a bank holiday Monday seemed an ideal time to complete, what is, a very dull job. 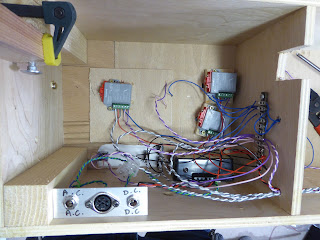 The picture shows the primary end of the fiddle yard with the three motors in place along with the power connections and high frequency cleaner. As an aside, the cleaner was also a post show addition and showed that one particular engine has a dead spot in its pickups somewhere. It flashes with each rotation of the wheel!

The layout has now gone back onto the units where it is stored and I can carry on with detailing the layout and building stock.

Last week the layout had its first outing at the Loddon Vale MRC 50th Anniversary Exhibition in Swallowfield, close to Reading. I had attended this show before as an operator for Matt Kean and he came and helped me this time. With it being just 10 minutes from home it made it an ideal location to try the layout - close enough to dash home if anything was needed (it wasn't). 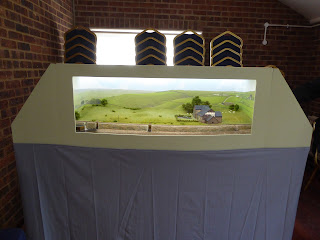 We were put in a corner which was fine and had plenty of space to work with. It was less than 30 minutes to put the layout up and with experience we could probably get it down to a lot less. The inbuilt lighting proved it's worth as the day started fair but got dark and wet at one point and the lighting in this corner was not that strong. 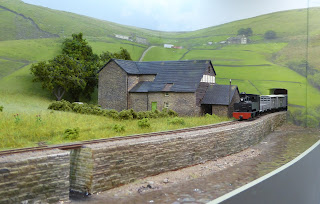 The layout attracted some lovely comments which was very gratifying. The water was commented on as the light catches it as you move your head which does create a good effect. In the picture above Joan, painted plain black, is hauling some WLLR Goods stock. 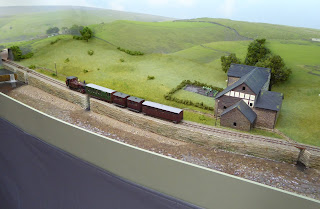 I took a few photos but would have been better either with a flash or tripod as many came out more blurred than I find acceptable. Above is one of Matt's rakes - North Wales Narrow Gauge Railway 0-6-4T ‘Gowrie’ single Fairlie hauling a mixed train of Festiniog and NWNG carriages. 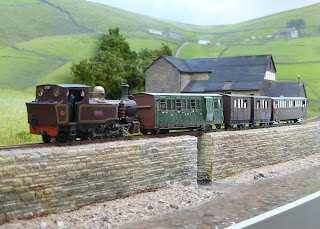 The embankment provides a good viewing point for stock. This is the same train but from a more realistic low level view. 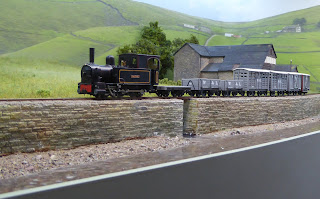 WLLR 'The Earl' with the goods. Matt had fixed the nameplates that morning so it is steadily looking more and more like it did in Cambrian days. 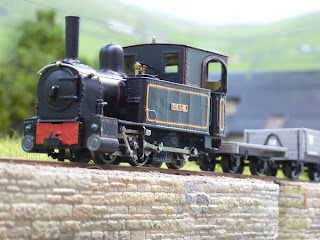 A close up of 'The Earl' is not too shabby and really shows off the lining that Matt did.

Overall the layout performed well. The obvious niggles were:


There's still plenty of detailing to do but for a first outing it was a very successful event.
at May 20, 2019 No comments: