Don't you love wet bank holidays when you are just forced into spending your time modelling. I had planned to get into the garden over Easter but as that would require waders due to the rainfall we had yesterday...

A couple of shots that show progress. The mill is being slowing clad in embossed stone from South Eastern Finecast. The Wills sheets I had planned to use had stone work that was just too large. This is about the right size. I'd not come across them before but I ordered a sheet more in hope than expectation and it turned out to be what I wanted.

In the photos below you can see the mill in place with the mill wheel housing both separate and in place. There is a window in the wall of the mill housing through which you can presumably see the mill wheel going round. I was thinking how to achieve this when there was an article by Geoff Helliwell in this month's Railway Modeller concerning N20 motors. These are small motors complete with gears so I bought a 6V 30 rpm motor and if I run it at 1.5 volts it turns suitably slowly. I'm going to mount it on the embankment and make the mill wheel housing slightly less permanent than the mill building itself in case of future maintenance. The wheel is the Wills wheel. 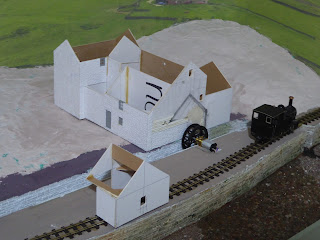 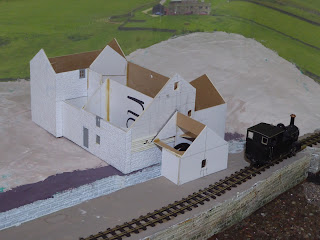 Another flurry of activity has taken place. With the Mill building in prototype form it meant the groundwork could be finished off. There were a very messy few evenings where I carved and shaped the polystyrene and then I used up a coupe of tubes of border adhesive and laid down some strips of J Cloth. As that was drying I mixed up some polyfilla, added some brown pain (not enough) and was fairly liberal with the gloopy mix to eliminate a few areas that were still too flat. IT was then left to dry and 48 hours later some of it is still damp but that's fine. The overall effect is pleasing. If I did it a second time I'd blend the right hand side into the backscene better but too late now and it's amazing what you can hide with trees and bushes!

Here's an overall view of how it looks. The top fascia has been mounted at the back just to keep it out of the way. That is not the usual position!

Snow day! The Beast from the East II meant I gave myself a day off from chores or driving anywhere and focused on building the mill. I'd recently filled in the scenic area with polystyrene - more use of Celutex having been abandoned due to having fibreglass in it which isn't good for anyone, especially the cat. Now it was time to tackle the mill.

There are many problems about the mill, not least not having any decent plans or pictures. I've trawled all my books, the internet, friends archives and the majority of pictures are of the mill in later life. The best picture was from a Railway magazine but even that shows the mill in a fairly abandoned state.

What I have discovered is that it is essentially L shaped with two extensions, one of which goes over the mill race and houses the mill wheel. It's embedded into the hillside and the judging by the windows and doors, the read portion (which must be the living accommodation) must be higher inside than the working portion at the front. Overall it appears to have 4 different roof angles and is a mixture of stonework, timber cladding, rendering and timber framed. Oh and did I mention no plans or drawings. I know I could go up to Welshpool and do a site visit and ask to measure the actual building but I'm not that sort of modeller.

It was going to be trial and error so I started with a cereal packet mock up but that was just not right, I'd clearly got the elevations wrong. Still, it gave me the direction to move in with shallower roofs and reduced depth. I found a picture of the mill with a train going by so that helped to estimate the height. I then progressed to the second mock up but this time out of mounting board. 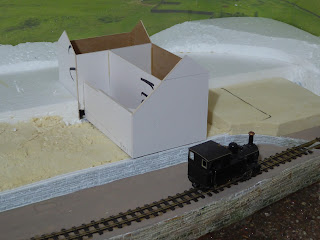 I started with the base and just built up the sides. After I had done the first left corner I realised it was still too small so I raised it all by 10mm just by putting a second, larger, piece on the existing wall. There's nothing to say what is right or wrong so I just progressed round the building adding extension pieces and walls as I thought it looked right.

I still have the extensions over the mill race and to the right of the building to do but they should come quite quickly now that the basic shell is there. What will happen next is that this will move from mock-up to the actual building by just being clad in different Wills sheets. I'm coming to the conclusion that the rendering was potentially a later addition so I will mainly use the same stone as I used for the mill race walls along with timber cladding. There is just a small amount of timber framing on the front face, most of it is on the right hand side.
at March 19, 2018 No comments: