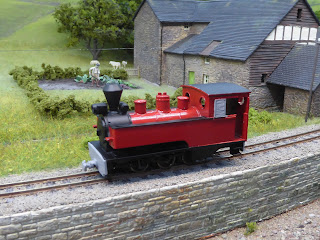 too red. It was the only spray red in the humbrol range and it looked okay in a small amount but on the model it makes it look too toy like. Now I need to find another source of red and decide whether I am going to over spray or strip it back - again!
at November 18, 2019 No comments:

I usually spray paint in the garden in the dry but the weather has not been particularly kind recently. Even when dry there has been a lot of moisure in the air. I've had to resort to getting the spray booth out. I've found that sitting it on the windowledge of the railway room sucking the air out the open window works pretty well. The window is north facing so with the usual south westerly winds we get it pulls any excess out the window. It's not ideal but it works for me.

Below are the 12 wagons I've had waiting for painting. These have had a couple of coats of primer, a coat of topcoat and have spent most of the day in the airing cupboard. 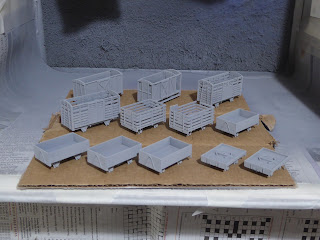 I also primed the engine Joan with some etch primer but I can't have cleaned it thoroughly as I should have as there is a blot on the side tank where the paint hasn't taken. It remains to be seen whether remedial action needs to be taken.
at November 03, 2019 No comments: