Letting the passengers sit down

I've had a WLLR coach partially built for a while. It's one of Worsley Works scratch aids. It's certainly caused me to do some scratching of my head as I worked out what I needed to do. I've had the basic shell built for a while but have kept putting it off going to th enext stage. There were definietly a mixture of reasons in there from being unclear on the next stage, unclear how the roof was going to be done and also the soldering wasn't going that well.

I decided I needed to fix my soldering first and invested in a new temperature controlled iron. I suspect that all I needed was a new bit in my 25 year old Weller iron but new bits are a similar price to a new iron these days! I also decided to stop using multi-core solder and started using some Carr's solder I had in stock. I've always used Carr's green flux. It made a huge difference or else I was just more confident. 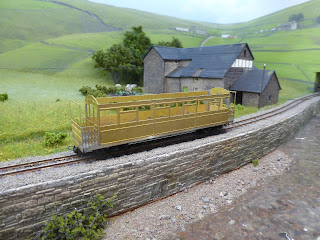 The first job was to take off the false flooring on the verandas as it was making the railings too high. then I was able to fix the railings relatively easily, if you ignore the burnt finger. At least it was only one finger. I still have memories of 40 years ago catching a falling soldering iron by the hot end. That hurt and necessiated a trip to the school nurse - do they still have those?

I also soldered in some brass nuts to hold the fixing screws for the bogies. Now I need to work out what height the coaches should be and whether there is enough space for the steps on the end.
at December 30, 2019 No comments:

That's better. Matt came up trumps, again, with a can of Ford Burgundy Red. The engine did require stripping back to bare metal but the effect was worth it. Thankfully Christmas, for me, is one of those times when I can settle down to some modelling so I have cracked on and got Joan repainted. the photo is cruel and shows where the brass banding on the domes has not come out as well as I would like but in normal use it gives the necessary level of colour. 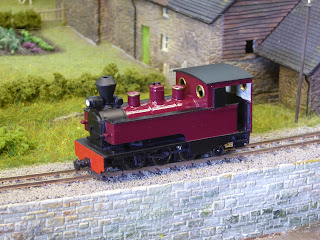 I had ordered soem nameplates from Narrow Planet but they are too large. I was surprised when I ordered them that plates for this loco weren't available as a set. Guess what I found today when reviewing their site. Ordered and will hopefully be delivered before the first outing of the layout this year.