I made some progress yesterday in that I completed the rewiring of the layout. It was only 6 sections that needed to be brought to a central point and then the NCE PCP board had to be wired in.

Today's job was to rewire a Grafar loco to DCC. Fortunately the guys at DCC Supplies have manufactured something called a DiGi-HatTM which makes the job relatively easy.

So the loco was dismantled, the old brush housing removed and the DiGi-Hat inserted and it slops around. The instructions say " If it is a sloppy fit then it has either been drilled out or is a rare variant and you need a Phat-HatTM. As I've owned this loco since new I know I haven't drilled it out so I suppose I should be proud to have a rare item. However, I now have to wait 2 or 3 days for a Phat-Hat to arrive - have decided this is one job I would like not to be bodged.
at March 25, 2012 No comments:

Calling it a day

I've had another couple of goes at making the chassis work but I can't make it run reliably. This is sooo frustrating that I have made the decision to stop modeling in 3mm. It's a great shame because 3mm is a fantastic scale and has a huge amount of potential. If I has modeled in 12mm instead of 14.2mm then it would have been significantly easier as old Triang ready to run chassis could have been used and also ready made track is available. As it was, I wanted to try finescale modeling and I have come up short.

The 3mm society has made great progress in making finescale less of a model engineering scale. There is the flexible track which is tremendous and components for making points are now becoming available. There are the square ended axles that should remove the quartering issues that beset my early efforts. I would recommend the scale to everyone. For me, I just don't seem to have developed the right skill set and I want to be able to see progress for the limited time I have available for the hobby.

So yesterday, at the Abingdon show, I handed over my 3mm modeling items to a fellow 3mm Society member for sale on the Society second-hand stall.

I shall take a little time to plan my next work but I know I will be going back to OO9. I have come to realise that I do like to see trains running round and round every so often and that won't happen in anything except narrow gauge. I also know I want to experiment with DCC and computer control. I have an NCE Powercab and so yesterday I bought their computer interface card and some point motor decoders. I intend to make use of Mospick Halt to try DCC on an existing layout before committing myself big time.

Yesterday I ripped up the fiddle yard of Mospick Halt and removed the electrics. The way I did the fiddle yard was not at all suitable for automated control so I will turn it into a traditional passing loop yard and see how easy it all is to control. 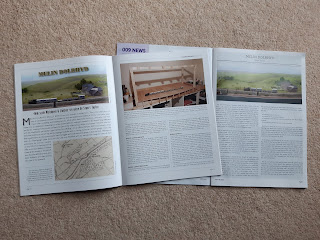