The first cut is the deepest

The Kenavon show has been and gone. The layout ran very well though the Earl definitely prefers travelling anti-clockwise. A couple of couplings and lead weights came off when I was packing away and I also dropped a cattle wagon which broke into 4 parts but all were fixed in a 15 minute session on Sunday.

The one obvious problem was that I had previously made some card tunnels to prevent light getting in from the sides but they have warped slightly and because I made them too small the stock was always hitting them. There is absolutely no way the coaches are going through so new ones need making before the next show.

I also need some information for visitors to read. I was asked the same questions over and over again so have ordered some acrylic stands to go on top of the layout - the advantage of a layout with a top! The bookmarks I had ordered were a great success, I gave them out to all the children and some adults as well.

The next show is Nailsea at the end of March and that is likely to be a much tougher test of the layout as it will be its first 2 day show. I possibly have enough stock but I think one more engine would get the roster up to something that can accomodate one or two failures without having to repair on the fly. I also should finish the coaches but I sense some serious procrastiantion going on there...

I've had the kit of Triumph from the Bowaters Paper Mill complex, now preserved as the Sittingbourne and Kemsley Railway, in the stash for a while along with a spare Bachmann 2-6-2 N gauge loco. The kit is meant to go on a Minitrix 2-6-2 chassis but I used the Bachmann under Joan and it is a very good runner.

As always, there is some initial work to marry up chassis to footplate and some significant cuts had to be made to open up the footplate to accomodate the block of the motor. Hopefully it will be worth it. 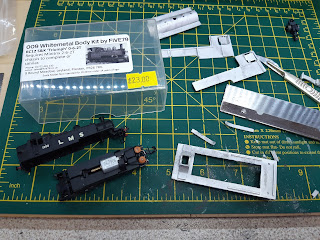 I was not aware of the Bowaters Mill Complex until recently and it looks a fascinating prototype, not least because they also had the engine Monarch which went to the Welshpool and Llanfair where it performed equally badly and a kit is available...

How an impending exhibition focuses the mind

The exhibition season is about to start. Melin Dolryhd is going to appear at 3 exhibitions in 3 months. Over Christmas I made great progress on coaches but then January came and all I can say is that I am glad January is behind me. It was a month of calamity in the Taylor household and progress on hobbies came to a very solid halt!

Now with 2 weeks to go till the first show of the year I need to make some progress. The layout is fine as it is and there is always detailing to do but I am short of trains to be comfortable with a one day show and am definitely short of stock for a 2 day show should any of them feel the strain.

Joan is back available though still needs detailing. Hopefully it's plates will arrive in time but it made sense that since Joan is a preservation engine of the WLLR then it should haul a preservation train so a hunt of ebay and hey preto, an instant train.

Having set the time period of the actual layout to 1912 I have a few more options in terms of stock. Bolster wagons, flat wagons and sheep wagons all existed by this point in time so examples of all are in the paint shop waiting to be completed. First one completed are the sheep wagons. 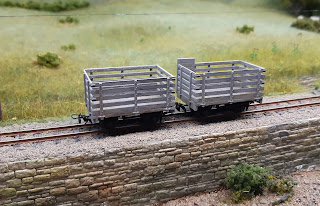 If any more wagons are finished before the first show then it will be a bonus. For now, I believe I have enough stock to run for a day.

I wonder if anyone will notice but these pictures were taken on my new phone. Up till now all pictures were on my Panasonic DMC-TZ60 Compact Zoom which is a great camera which I used because my old phone had a rubbish camera but I've upgraded my phone to a Samsung A40 and it is nice to once again have a phone with a decent lens in it.

If you want to know which shows I am attending then please pop across to the website or Facebook page.