I set myself the goal of having something working over the Christmas break and I achieved it - for all of 2 minutes!

Firstly I twisted lengths of wire together. Technically you only need to do this for long runs but I decided it would be beneficial on tracing faults to have teh wires woven together. With Jill's help we were able to wind together 15ft of wire at a time using the Dremel. I then soldered on 30 individual wires to the different sections and it looks like this. 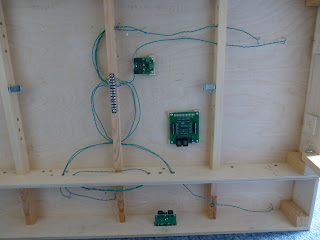 The pair of wires that feeds a section I want to detect in is fed through a DBD22. The AIU is in place to take the output from the detector. The other piece of electronics is the UTP panel. The other board looks identical.

I then connected up the NCE station and it worked first time. The mainline points are very smooth. There was no jumping and despite not yet having wired the frogs the engines ran well.

Unfortunately I then shorted the layout and it all stopped. Most has come back to life but not everything. I suspect I may have damaged a decoder or I just don't know how to use the new equipment. The basics are definitely right. Now I need to go back to Kevin at CoastalDCC and purchase some short circuit protection.
at December 30, 2012 No comments:

It is often said that DCC can be run with just 2 wires. Now technically that is true if you have a simple circuit of track. The reality is significantly different. The recommendation is that you have droppers to each individual piece of track to minimise voltage drop. Therefore if your circuit contains just 4 pieces of track then you are immediately up to 8 wires. That is before you think about any accessories.

Here is the block diagram for the new layout. 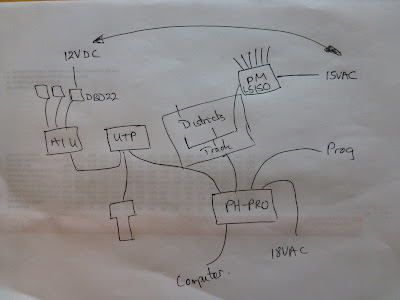 It's really simple - honest! The pieces are:


I can't be truly definitive as to how many wires there will be as the goods yard has not been designed yet. However, my initial calculation is that I will have over 200 wires to put on this layout.

If that wasn't bad enough I've worked out I need 3 different power supplies!
at December 27, 2012 No comments:

It's been a while coming but finally decisions have been made and a start has been made. I've had plenty of ideas but have come down to a few core ideas that I want to achieve. In no particular order they are:


I had some boards that I had built for my 3mm work which I increased in width and two of those are capable of being set up in the spare room at a push with us still able to put other junk in the room. 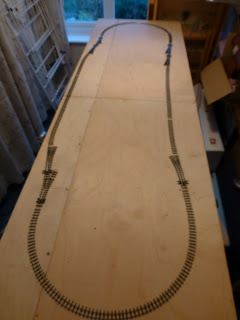 The Welshpool and Llanfair Railway is particularly interesting and the book by Glyn Williams has some superb pictures. There are many cameos that can be modeled especially where the railway runs over the brook between the buildings.

For computer control I have moved on from my NCE starter set and bought the professional version from Kevin at Coastal DCC. Kevin was really helpful. He happily had a phone call with me one evening and we discussed the different options and what would and wouldn't connect. It was a straight choice between switching over completely to Digitrax and LocoNet or staying with NCE and mix and matching different manufacturers offerings to make it all work. I stuck with NCE as I prefer their handset and most of the extra work involved is just common sense.

So it's Christmas and what else do you do except eat, drink and work on the railway. The track plan is a simple circle. There is a 4 road fiddle yard at the rear and a passing loop at the station at the front. This will allow 4 trains to be run in a sequence. There will also be a goods area for shunting and showing off wagons.

I have made use of the new Peco mainline 009 points. At 18" radius I am hoping for better running than with the standard 9" radius points. I have used 2 Y points in the fiddle yard as these are 12" radius. I've laid the outer track only and now am going to wire it up and prove to myself I can connect all the DCC electronics successfully.