It's always dangerous to think. One morning this week I got to thinking about Bowaters and the buildings that were made with corrugated materials. The various sheds were probably corrugated iron and that led me to thinking about how to model it. I quickly knocked up a corrugated sheet in Fusion 360 and set it printing. 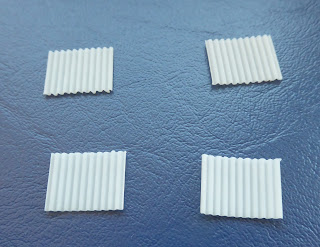 The outcome was much better than I expected for a first print. The dimensions are all wrong but it told me that I could print these vertically with a nominal thickness of 0.25mm.

I then had to work out what were realistic dimensions. Matt reminded me of a corrugated iron thread on ngrm and that led me to a picture of a platform store which appeared to be made of sheets of iron that were 7 feet long and 2 feet wide with 9 corrugations across the width. The person who took the picture had so helpfully placed a 6 ft rod against the structure. The rod was painted alternately red and white every foot. I really must make one of those - so helpful.

I suspect that manufactures will have had set widths but different lengths so I drew up an 8x2 sheet. I also made it slightly thinner at 0.2mm and also created a run of 10 sheets with a 1 corrugation overlap. The problem I foresaw was that the thickness of the resin would probably make the overlap too obvious. Putting the overlap in at the print stage allowed me to manage the depth at that point. 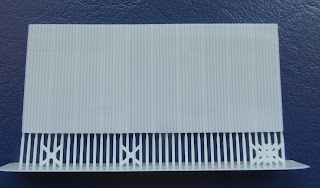 Again, not too bad. The corrugations are still visible as are the overlap lines. The thickness is an issue though. They are too flimsy. I also decided the overlap was insufficiently pronounced. It was also short. The length should have been nearer 80mm to represent 10 8x2 sheets

This is where parametric modelling comes into its own. The first attempt was a pair of parallel arcs followed by a rectangle which was then repeated in the opposite direction. When I did the second attempt I made sure that all dimensions were dependent on previous dimensions. This meant I simply changed the thickness of the material once and I changed the dimension of the rectangle once and it all changed shape automatically. 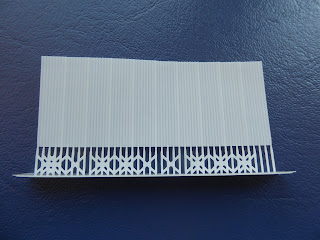 Much better, though I overcooked it in the UV chamber and it started turning brown. I can see the more pronounced overlap.

When the time comes I should be able to print off various sections, should I want to. In the meantime I've improved my skills which is often what this hobby is all about.

The longest project ever

Looking back through my blog stream I see that I first posted about the Welshpool coaches in December 2019 and even then they had been on the bench for a while. At last I can report that there has been significant progress. It's still glacial progress but it is definitely progress. 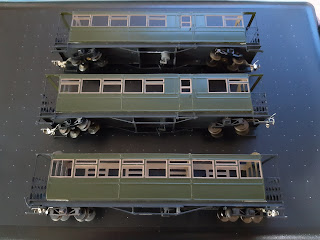 All three have the main bodywork done. Readers with very long memories may recall these are Worsley Works scratch aid kits. They were built with the sides soldered to the floor and a variety of detailing parts added

Allen, at Worsley Works, has also produced internal partitions which are a great addition. The coaches have been sprayed with a bronze green and then a mixture of Humbrol paints have been used for the detailing.

The next stage is transfers and it was looking like having to cut out individual letters from different transfers in different scales but a chance encounter with Andrew Jeffcock of Custom Model Decals convinced me to get him to design a complete set for me and those are now on order and expected soon.

I'm now working on the roofs. More on those in the next post.