In my last post I showed work on Triumph, an 0-6-2 Bagnall tank that used to be part of the Bowaters mill complex in Kent.

The body had gone together okay but, being a whitemetal kit, it was not crisp at all and the side tanks just didn't want to be parallel with each other but we got there.

The next stage was to add some detailing. There were a few obvious items that needed adding:


The photo below shows the finished result though it is cruel from being blown up larger than in real life. 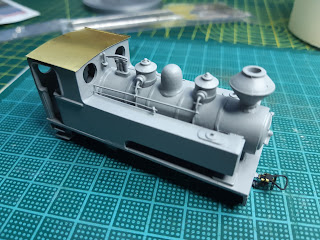 Adding this level of detailing was a new experience for me and practically everything had several attempts before I was happy enough. Generally I chose materials that were too big and needed replacing with something thinner or finer.

It was then cleaned and primed with some etch primer but it has not gone on well. The primer was an existing can that I had used before with mixed results. This time it came out worse, patchy and thick in places. It afforded me the chance to see some of the blemishes that needed fixing but ultimately it's going to be stripped and another can used.

Once the primer is replaced, the next stage of detailing can begin. The real engine has a significant number of rivets on the tanks and once you see them you realise the model is too flat. I've never tried them before but I've been given a sheet of Archers rivets so I built a mock side tank from plasticard, The rivets are very fragile and it was suggested I put them on after priming to limit them disappearing in paint. There was then a question of whether to put them on before the black and/or green. In the end I stuck with straight after primer, then sprayed the green, then brush coated the black as below 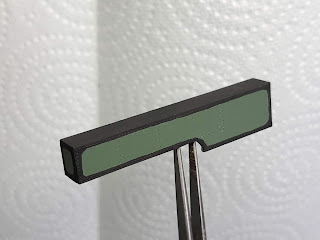 After that it was time to consider the lining. Again, something I had not done before but I wanted to try it. I picked up some Fox Transfers in the smallest thickness they had. As warned, they were tricky to keep straight and it probably is better to go for thicker ones and thin them with an overlaid black transfer. Nevertheless I was pleased with the finish. I discovered to my cost that I had no micro sol/set in stock and it shows with the various transfer edges still being visible and not being able to bend a transfer round the larger curve. The smaller curves were bought. I counted that there are 30 small curves on this engine alone so that sheet was worth purchasing. 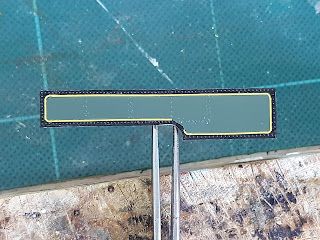 The result is pleasing and with practice I ought to be able to avoid some of the mis-joins that you can see close up.

The world has changed and not immediately for the better. Here in the UK we are two weeks into lockdown and are trusting that the measures in place will keep the number of deaths from Covid-19 under 20,000 which is what is described as a "good" figure. The immediate impact for me is working from home and I am one of the fortunate ones who can do that and carry on getting paid. Not everyone is so fortunate. There is more time and some of that time has been spent on reorganising the "office" so I can work from home all day. The computer has gone from the den where I used to occasionally work from home and, as a result, I now have a larger workbench for my modelling. I have had a serious reorganisation of the room and this is the result. 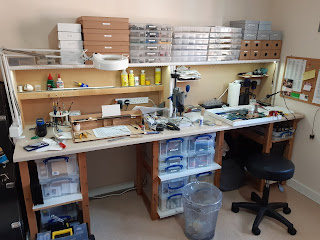 This means I can have more projects on the go at once. Usually I try to stick to just one project at a time but with multiple projects I get the chance to move to another one when I hit a roadblock on one and need to do some thinking. Also, I have the space so why not use it. Equally all exhibitions have been cancelled so now I have no deadlines and can afford to be a little less focused.

The first project is the model of Triumph mentioned in the last blog. The body is largely complete and I have been contemplating the detailing. Today I drilled out of the windows so I can put in open ones. I should have done that before building it! More on those in another blog. 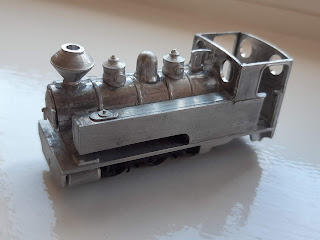 It's clear that in the future there is going to be a layout based on Bowaters so I expect a Facebook page to appear soon. Bowaters itself is not easily modelable but I will find something from it to create a layout from. I look forward to building something more industrial. In the meantime the locos can run on Melin Dolrhyd provided they can get round the curves!

The second project is the 3mm 4F kit that I bought a while ago. I used to model in 3mm but could not make a working chassis. I am going to have another go and am determined to be successful this time. I invested in a Poppy's jig and have got as far as loosely assembling the parts in the jig. 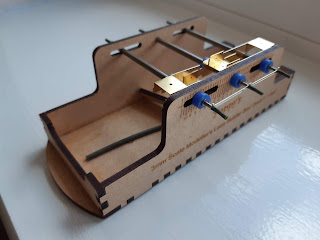 I have a couple of options for motor and gearbox. I do have an N20 motor and gearbox combination produced by a member of the 3mm Society and I have a High Level Slimliner+ on order. When that arrives I will make a decision on which to use.

The third and final project is Southwold in 3.14mm to the foot. David Eveleigh designed this stock to run on 2mmFS track and it came out to this weird scale of 3.14mm to the foot which is close enough to 3mm and so there will be a layout in 3mm that contains standard gauge and narrow gauge and it will be Southwold based - you can't hide the shape of those wagons. 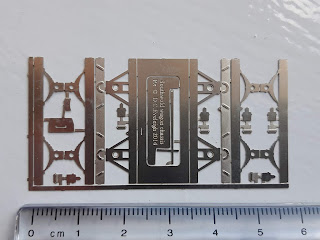 That's it. Everything on the workbench currently and, yes, I am procrastinating over the Welshpool & Llanfair coaches!
at April 04, 2020 No comments: