A layout needs good lighting. I knew I would do it with strip LEDs as I had some left over from lighting my workbench. I had enough for two runs, one on each of the overhead battens. The great news is that, not only does it light the layout nicely, it also provides lighting while I am working. 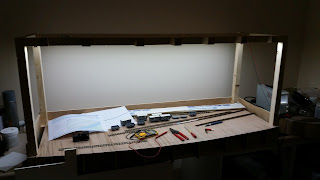 The ones I had were "day white" but I wonder if they are just a bit too white. I've ordered some warm white which I know will be at the opposite end of the spectrum of whites but I'm hoping that a run of these on the front batten will give a warmer reflection off the river that is at the front of the layout.
at January 29, 2017 No comments:

How many modellers have announced they have had a change of heart and want to do something different before the current layout is finished? All of us! The change of heart was caused by an increasing disillusion with DCC which didn't run reliably for me. Others have had great success with it but all I got was sparking locos that kept tripping the short circuit protection. Additionally a change of house and change of job took place so 3+ years later, here we are. 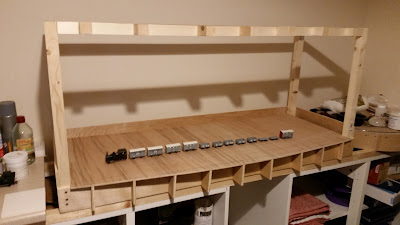 There's been plenty of thinking in this time. Despite now having a much larger railway room to play with I knew that any layout would have to be relatively small to give me any chance of finishing it. I knew it would be 009 - I have made so many friends in the 009 Society and they are such an easygoing and helpful bunch of people.

Within 009 there is a huge range of prototypes. Having been a standard gauge modeller for so many years I have really struggled to mentally adjust to the really tiny stock that many lines had. Fortunately there are two lines that have some fairly chunky stock, the Welshpool & Llanfair Light Railway and the Leek & Manifold Light Railway. The other attraction for both these lines is that they have a interaction with standard gauge which widened the modelling possibilities.

I looked at both and settled on the Welshpool line as being the more interesting. I then did the standard thing and looked at the stations to see which could be modelled. In truth only Llanfair Caereinion can fit into a moderate space but it didn't give me what I wanted, the ability to sometimes watch trains go by.

In the end I flipped my thinking on it's head and made watching trains go by the major requirement. Looking along the line I came to Melin Dolrhyd, where the line weaves between the mill and the river. Could I model it? I don't know but I'm going to give it a try. I've built the main board as can be seen. The eagle eyed will notice it will be in cameo form.

Watch this space for another post. Hopefully in less than 3 year's time.
at January 16, 2017 No comments: