The concept behind the layout is that there is a single line that rolls across the front of the layout. What is nice about the line is that it is on a permanent bend of varying radii and it is on a slight gradient. Nothing straight about this!

The line itself runs between the river and the mill race so it is effectively elevated for all the visible section. I had guessed on the height and it turns out I had set it all a bit high but that is not an issue as I can raise the river bed and can make the front lower fascia deeper to cover it. I knew there was a reason why I didn't glue the front fascia on!

The plan was to reproduce the curves and incline as best as could reasonably be achieved. I used foamboard and cut out some sections that had a 1 in 100 incline on them. the foamboard, I discovered, would bend sufficiently for my needs so I set about gluing it down a few inches at a time as far as each change in bend would allow. 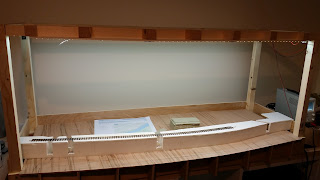 Eventually it was all down and I discovered it wasn't level front to back. I clearly wasn't as accurate as I should have been but a bit of card packing soon sorted that out. I added some bracing and glues the top down. As can be seen in the picture I cut the gaps where the mill race enters and leaves and where the two sluices are. The next step is to add cladding using Wills coarse stone sheets.

The lighting had to have an adjustment. Once the track bed was in place, the front row of lights were found to be just behind the leading edge in the middle of the board so created a shadow. I added a layer of foamboard to the underside of the wood sticking out on the lighting beam and added more LED strip to that. I also took the opportunity to add a run of warm light on this. Iain Rice, in his book on Cameo Layouts, says that warm lights are not suitable for British weather. However, I am hoping to create a yellowy/brown reflection off the river right beneath so I though tit worth a try. I can always just snip the wire to that strip of LEDs should it not work out.
at February 05, 2017 No comments: