I needed a break from paid work so took a week off. There wasn't a clear plan for the week except to spend time modelling and possibly going to a non-essential shop! I have a few projects on the go and really wanted to complete Triumph and make progress on the Pickering coaches.

What happened was I had some inspiration about how to do something on the 3D printer and, despite the recent problems with printing (not sticking, test file not printing, build plate shifting), I just decided to get stuck in and see where I got to.

What I ended up doing was going on journey printing windows. All the Bowaters engines had sliding windows and stable type doors. It's not clear why but there are two reasonable possibilities


Do a Google search for Triumph then you will see what I am talking about. These windows vary between 1, 4 and 6 panes and I've manage to find examples in green, black or plain wood (presumably paint worn away). The time in question for Triumph they were a green, 6 pane affair.

I did a crude measure of the gap on the engine where the window should go and came up with the following: 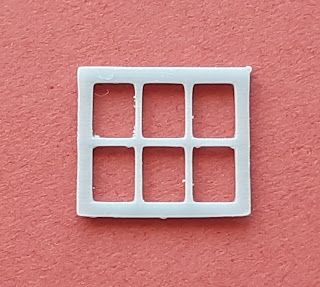 The dimensions are roughly 11mm by 9mm. The dimension of the edge probably works for a house window but those on Triumph are much slimmer. I adjusted the dimensions and came up with this variant that was worth painting just to see how it fared: 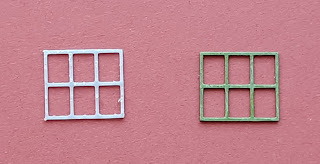 Getting better, though really I have gone too thin. The core dimension is 0.5mm and, after curing, there is enough strength for the item but I felt it needed refining and so I came up with this: 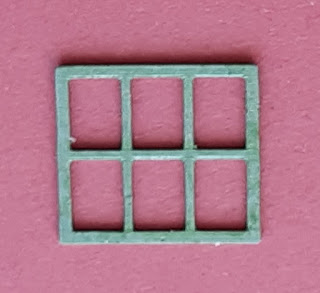 That looks right. It may not be dimensionally accurate but it looks the part and has the strength to withstand some handling. Time to add the glazing. I have been meaning to try Kristal Klear for a while so I broke it out, read the instructions and achieved this: 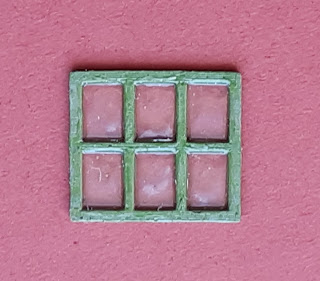 It really does dry clear and provide a glazed look. Put the unglazed and the glazed next to each other you see a brewing issue: 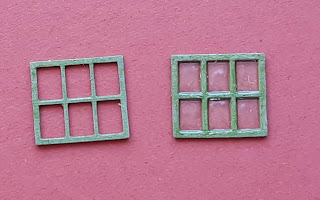 The glazing has made the window panes smaller and the frame larger. It's unclear if it is a trick of the light or a leeching of the paint but suddenly it doesn't look so fine. If you put it on the locomotive then it starts to grate for not being as fine as some of the other parts: 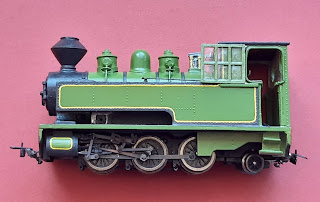 If that was the best I could achieve then I would live with it but I wanted to do better.

First I had to find a suitable glazing. That non-essential shopping led us to Hotel Chocolate from which purchases had to be made and said purchases were wrapped in clear cellophane which, according to the micrometer, was 0.05mm thick.

Back to the CAD package (Fusion 360, free for personal use). If I made the outside depth and edge 0.7mm and put a 0.4mm recess into the frame and produced an insert that was 0.3mm thick then it should just go together with a tad ofspace. Here's what it looks like on the screen. 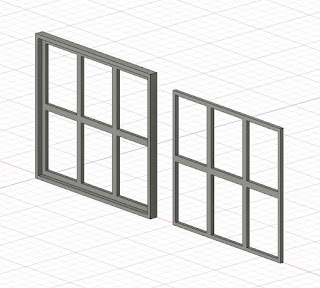 Those parts are thin but, painted up, glazed with Hotel Chocolat Cellophane, held in with Kristal Klear you get this: 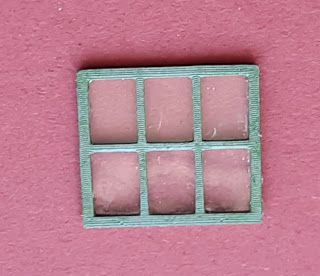 The printing layers are showing at this magnification but the bars have retained their thickness and aren't distorted.

Here is the end result stuck onto the engine with a piece of blu-tak: 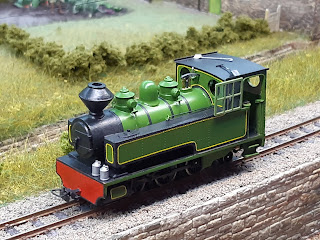 It's definitely a case of using the right material for the job. With much encouragement I have been working in brass and made the fire irons on the cab roof out of 5 thou brass and some nickel silver wire (every engine at Bowaters had fire irons on the cab roof).  The oil cans on the buffer beam were another 3D print (again, all engines at Bowaters had them, sometimes just 2, sometimes as many as 5). It took me probably 7 goes to get those right but they really have handles on them and now I have got it right I can print some more.