A green, a green, my kingdom for a green

Finding the right green has been quite a saga through lockdown, requiring several deliveries, none of which were right. Of course, right is a matter of perception but I knew the look I wanted to achieve. Early in the process, Simon de Souza had suggested Humbrol grass green but I had ignored him, as you do. When he suggested it again and did a paint swatch it was, of course the green that most closely matched what I was looking for. A burst of British summer meant I could do the spraying. I elected to paint the black with a brush rather than mask it up as the black blends round the end of the tanks anyway. It would be faster this way.

Another suggestion from Simon was to not use pure black but to use a dark grey. I decided to listen this time. Not having a dark grey I took the quarter full pot of black and added a couple of dollops of white and one dollop of reddish brown - precision mixing.

Then came the lining. Suffice to say I almost threw the engine at the wall. Matt Kean produces beautifully lined models and he would have done this one for me but I wanted to learn. I have several locos tucked away and they all need similar lining so it seemed a skill I should learn. 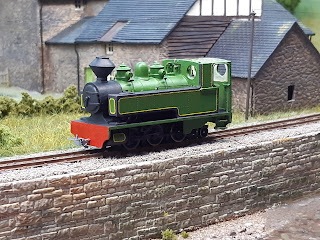 This is all I have managed so far, one side, both water tank fronts and one cylinder. Some of the lining has had 4 or 5 attempts. It just would not lay flat. I've experimented with red and blue Micro Sol and still not got the technique right but I will get there!

It looks a little toy like without the roof (did I say I bent the one I made...) and would be much better with the correct chassis but that will have to wait until I learn how to make my own chassis. So many skills to learn...
at June 07, 2020