The last post showed the roofs with the right shape, soldered up and with the holes for the fixings all drilled. The next stage is to fit the rain strip. I used 0.4mm dia brass wire but I wish I had used 0.3mm. I'd done a test run before so I knew better than to try and solder along the whole length. This time I tacked it in the middle and then curved it down with the occasional tacks - no more than 5 to 7 along the length. Once all the tacks were there I could pick a tack and heat it up more to get a better fit since I knew there would be two tacks either side to hold it roughly in place. Repeat on the other side and then repeat for another two roofs and the job was done.

The fittings consisted of 5 oil lamps on each roof, 6 or 8 torpedo vents (posher people got more ventilation) and two stove chimneys on the composites. One of the stove chimneys is over the guard's compartment. The other is in the middle of the seating area so it's not clear what it was used for.

All the fittings I designed for myself based on rough drawings and picture and printed on my Anycubic Photon S printer.

Painting opened up a new area of debate. From the few photos published, it is clear they were painted white originally but I'm modelling several years in so they would have been sooty grey. Nearly all the photos of the coaches are low down so you can't get a sense of the colour of the fittings. Eventually one high up shot showed the torpedo vents much darker than the roof. There are no photographs with the oil lamps in place so I have assumed they were painted the same colour as the roof and would have weathered equally badly.

Having decided that white was definitely not sensible I eventually sprayed them with primer and then put on a Humbrol Dark Grey wash which was dabbed with a kitchen towel to give a more mottled appearance. The vents were the painted with a mix of Humbrol Gunmetal and Coal Black. The mix means it is neither black nor grey but since one is a metallic and the other a satin, it gives a sheen that contrasts with the roof itself. A quick spray with Halfords Matt Lacquer this morning and the end results are below and are ready to be attached to the bodies. 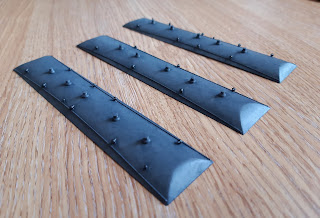 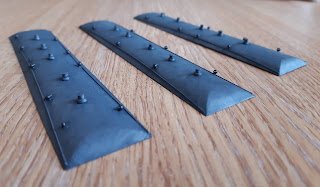 Finally a taster of what is to come - the roofs resting on the bodies of the coaches. The coaches have received their transfers but still need glazing and seating. I'll save that for next week.